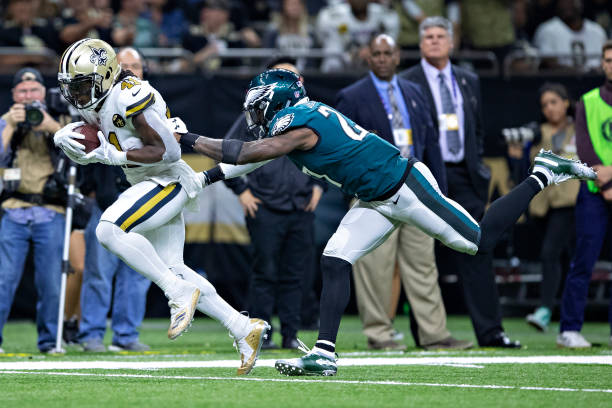 The New Orleans Saints will take on the Philadelphia Eagles this Sunday in a playoff game inside the Superdome. The last time these two teams met the Saints embarrassed the Eagles 48-7, while this score may not be replicated it won’t be far apart. Take a look at what the Gumbo Sports staff is predicting in this Sunday’s matchup.

This Sunday the New Orleans Saints will go one on one with the Philadelphia Eagles in what should be a great matchup. The Eagles who have been somewhat of a surprise team this season considering there record starting out at 4-6. Since then the Eagles won five out of their last eight games. The Saints handed the Eagles a devastating loss in week 11 and while they defeated the Super Bowl champs 48-7, this kinda of best down may not happen again but the Saints with Brees and company will defeat the Eagles, I am predicting 31-21 Saints. The game will start slow but by the third quarter the action will pick up. Saints win 31-21 and the end of the Nick Foles magic ends in the big east.
– Chris Nalls

This game will be completely different than when these teams met up in the regular season. The Eagles left that week 11 matchup angry and offended. The Saints shouldn’t take this game lightly at all. Both teams are very similar in the fact that they feed off of the energy surrounding them. I think this will be a high flying game for both teams but ultimately Drew Brees and the Saints’ explosive offense will be too much for the Eagles to handle. Saints, 31–17.
– Adam Forsythe

When the Eagles and Saints faced off in Week 11, the Saints completely blew out the Eagles. They dominated on both sides of the ball, leading to a final score of 48-7. I expect this matchup to end a little differently, as the Eagles are one of the hottest teams in football right now. Nick Foles is doing a great job of giving the Eagles the chance to win every game. However, I believe the winner will remain the same. Drew Brees and the highly-energetic New Orleans Saints’ offense will prove to be too tall of a task for the Eagles’ struggling secondary. Saints Win 34-24
– Bryce Duhon