New Orleans Saints Eliminate the Eagles from the Playoffs 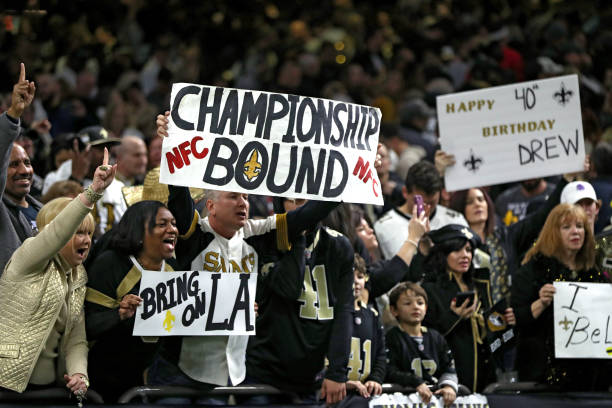 In a wild game, the New Orleans Saints were able to clutch out a win against the defending champion Philadelphia Eagles.

The Saints started off poorly as Drew Brees under-threw a deep ball to Ted Ginn Jr. on the first play as cornerback Cre’Von Leblanc intercepted the pass.

On the ensuing drive, Eagles’ quarterback Nick Foles connected with wide receiver Jordan Matthews for a 37-yard touchdown. After the Saints punted on their next drive, the Eagles marched down the field and Foles dove for a one-yard touchdown.

The Saints punted the ball on the drive after the Eagles’ second touchdown. However, they didn’t have to wait long to get the ball back as cornerback Marshon Lattimore caught a tremendous interception on the Eagles’ next drive with only a few seconds remaining in the first quarter.

The Eagles received the ball to start the second half but were unable to muster anything as they punted the ball.

The next drive for the Saints was riddled with penalties, resulting in a seemingly endless drive. On 2nd & 10 from the Eagles’ 46-yard line, the human Swiss army knife, Taysom Hill, connected with running back Alvin Kamara for a massive touchdown. However, the touchdown would be called back due to a holding call on offensive lineman Andrus Peat. The Saints eventually found the end zone on that drive thanks to a two-yard pass from Drew Brees to Michael Thomas.

The Eagles’ next drive would stall as they punted away. The Saints drove down the field and Will Lutz kicked the football straight through the goalposts for a 39-yard field goal. The Saints added to their lead, bringing the score to 20-14.

The Eagles once again stalled on offense and punted the ball back to the Saints. However, the Saints were unable to add any points to their score as Lutz missed a long 52-yard field goal.

With 2:58 remaining in the game, the Eagles took over from their own 42-yard line. Foles completed a pass to tight end Zach Ertz for a 16-yard gain, and on the next play, the Eagles benefited from a roughing the passer penalty on defensive end Marcus Davenport. After a rush for no gain on the next play, the Eagles looked to the air for their yardage. Foles attempted to complete a pass to wide receiver Alshon Jeffrey, but Jeffrey couldn’t haul it in and Marshon Lattimore got his second interception of the night, which also sealed a victory for the New Orleans Saints.

The undisputed stars of the game were Marshon Lattimore and Michale Thomas. Lattimore earned four total tackles, two pass deflections, and two clutch interceptions. On the offensive side of the ball, Thomas hauled in 12 receptions for 171 yards and one touchdown.

The Saints must now start preparing to take on the Los Angeles Rams in the NFC Championship game as they move one game closer to achieving the ultimate goal of winning Super Bowl 53.