Saints vs Eagles: Studs and Duds 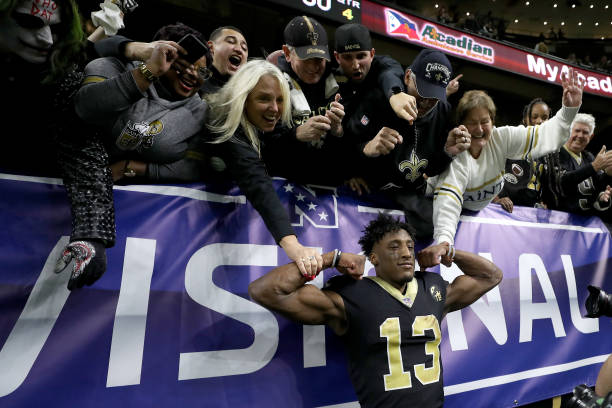 Sunday night, the New Orleans Saints and the Philadelphia Eagles matched up in the NFC divisional round. The Eagles came out flaming. They put up a 14-0 lead but could not hold onto it. The saints would shut them out for the rest of the game and won 20-14. Here are my studs and duds of the contest.

It felt like Michael Thomas wasn’t covered by anyone the entire game. Thomas shined, racking up 12 receptions with multiple coming on 3rd and long. He also received for 171 yards and 1 touchdown. If there is one word to describe him in this game, it’s clutch.

Peat struggled against the defensive line of Philadelphia. And it wasn’t because of blocking miscues. He struggled because of discipline. Peat totaled 4 HUGE penalties during the game: 2 false starts and 2 holding. One of the holding penalties was the biggest mistake by Peat. It took away the long touchdown from Taysom Hill to Alvin Kamara. Although they won, the other touchdown that was nullified by Peat would have made the Saints job that much easier.

What can be said? Drew Brees did Drew Brees things. Per usual, the future Hall of Famer dominated, completing 28 of 38 passes for 301 yards and 2 touchdowns. Brees was shaky in the first quarter as he threw an opening play interception. However, in the following quarters, Drew was stunning. He converted 3rd down after 3rd down and completely changed the pace of the ballgame.

Aaaahhhhh…Nick Foles. The unlikely superstar for the Eagles led his team to a super bowl championship last year, sealing his name in the households of Eagles fans for generations to come. On Sunday, he looked to do the exact same thing: take control. And in the opening quarter, it looked like he was going to do just that. He put up 2 touchdowns to give the Eagles their 14-0 lead. Nothing else could go right through. Foles ended up completing a mere 18 of 31 passes for 201 yards. The two touchdowns he had both came in the first half. Along with his poor performance, Foles threw 2 picks.

Marshon Lattimore started the game off subpar as well. He was burnt by Alshon Jeffery multiple times and defended 2 passes of the numerous that came his way. That was until the young DB made a fantastic interception that helped change the pace of the matchup. He wasn’t thrown at much after that. Lattimore ended with 4 solo tackles and two interceptions. He was a huge contributed to the Saints’ defense.

The former Bears WR didn’t play much of a factor in this game. He only caught five passes. Only had 63 yards receiving. He also had 0 touchdowns. He is on this list, however, because he choked harder than the Falcons in 2016. On the final drive, the Eagles were driving down the field. They were prepared for Nick Foles to come back from a fourth-quarter deficit again and move the team on to the next round of the playoffs. Suddenly, Foles laced a line drive pass to Jeffery. JEFFERY DROPPED THE PASS. It just hit his hands and bounced into Marshon Lattimore’s lap. He lost the game and probably made some Eagles fans question their life choices.