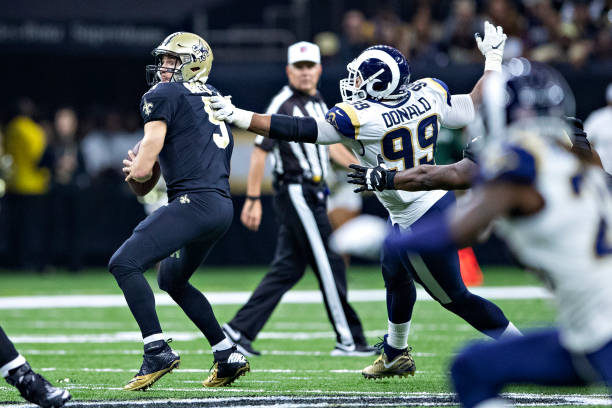 Last week’s game against the Eagles started out as bad as you would want, but the Saints did overcome the adversity and defeated the Eagles 20-14. Eagles quarterback Nick Foles had a tad bit of magic left in him for two touchdowns, and then his magic ran out after Saints cornerback Marshon Lattimore picked Foles of twice last week. One of those interceptions ultimately ended the game, and the Saints moved on. This week however the Los Angeles Rams come to town in a showdown for the NFC Championship and a trip to see who will represent the NFC in the Super Bowl.  Saints defense will have to play at an all-time level with the way the Rams run the ball, New Orleans defense has come together near the end of the season and has stepped up for them. I am taking the Saints to win 27-24, the way the city has come together and the feeling around town a lot like it did the last time the Saints were in this situation just says to me its the Saints year.

When the two teams collided in week nine of the regular season, the Saints dominated the Rams until they allowed them to gain momentum in the third quarter, tying up the game. The Saints ultimately won by a score of 45-35 thanks to a 75-yard touchdown from WR Michael Thomas in the fourth quarter. Thomas seems to have this playoff magic that surrounds him. I expect another tremendous performance from the young star this Sunday. I also expect another dominant performance from the Saints 2nd-ranked run defense. The unit held the Rams to a mere 92 total rushing yards in their first matchup. The Rams are on coming off of a great game on the ground as both C.J. Anderson, and Todd Gurley sliced through the Cowboys defense for 123 and 115 yards respectively. However, I believe they’ll run into an immovable force in the Super Dome with that force being the Saints dominant run defense. Saints win, 31-17

When the Saints and Rams faced off in Week 9, the first and second halves were like two different games. The Saints pummeled the Rams in the first half, scoring 35 points against what was seen as one of the better defenses in football. In the second half, the Rams gained momentum, eventually tying the game at 35. Michael Thomas came up huge with a touchdown later in the quarter, and the Saints finally won 45-35. I don’t think either team will have a first-half result where one dominates the other. These are the top two seeds in the NFC, two of the best offenses in the NFL, and both have a legit shot to win the game. Although the Rams have a great balanced attack with Jared Goff and Todd Gurley, the Saints defense seems not only better than the first contest but better than just a couple weeks ago. History will repeat itself with the Saints winning another close game, in which I expect both Drew Brees and Michael Thomas to overpower the Rams’ secondary. The Saints win 38-34 and move on to Super Bowl 53.

The Saints vs. Rams game in the regular season was meant to be the battle of champions. The matchup between the two juggernauts of the NFC. The game was just that. And it was honestly very entertaining too. It looked like the Saints were pulling away in the first half, but the Rams brought the heat for the seconds. I predict another great game. Drew Brees will pass for over 400 yards against a stellar run defense and lead his team to the Super Bowl with confidence. Saints win 42-38