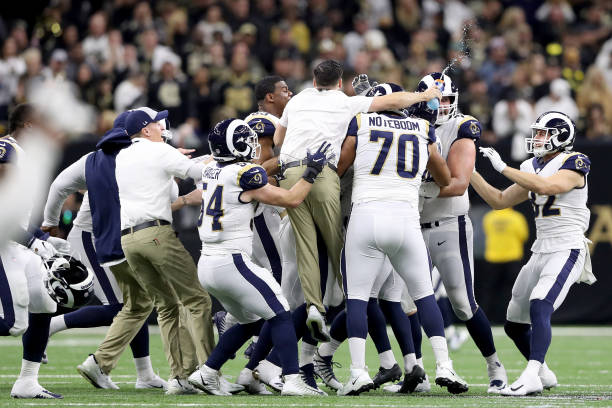 In true heart-breaking fashion, the Saints were denied a Super Bowl appearance once again. In a game that honestly came down to the wire, the NFC Championship was indeed a battle of the best.

The Rams won the coin toss and elected to defer, giving the Saints the ball first. The Saints methodically moves down the field and, after a dropped catch in the end zone by tight end Dan Arnold, they capped their drive off with a 37-yard field goal from kicker Will Lutz. The Rams received the kickoff, and just three short plays later, Saints’ linebacker Demario Davis intercepted a dropped Todd Gurley pass. The Saints capitalized by adding a 29-yard field goal to the score. After a Rams’ punt, the Saints took over on their 32-yard line. After a 3:51 drive, Brees connected with tight end Garrett Griffin for a five-yard touchdown.

The Rams’ first drive of the second quarter ended with a field goal as Greg Zuerlein connected on a 36-yard attempt. The remainder of the second quarter was relatively uneventful as the next three drives culminated in punts. With 1:50 remaining in the 1st half, the Rams drove down the field and ended their drive with a 6-yard rushing touchdown for Todd Gurley. The Saints then knelt the ball, ended the first half with a score of 13-10 in the Saints favor.

The Saints defense started on the field in the third quarter, and they quickly got the Rams off of it as they forced them to a punt. The Saints took advantage of their opportunity as they drove down the field and capped it off with a short touchdown from Brees to Taysom Hill. The Rams answered back with a touchdown of their own as Jared Goff connected with tight end Tyler Higbee for a one-yard score.

The fourth quarter started with a Saints’ punt followed by a Rams’ punt. The Saints were unable to muster anything on their next drive, and once again were forced to punt. The Rams were able to add three points to their score on their next drive as Zuerlein made a 24-yard field goal.

On the Saints’ next drive, the football world witnessed one of the worst non-calls in sports history. On a third-down pass to the right side of the field near the end zone, Saints’ wide receiver Tommylee Lewis was obliterated by Rams’ cornerback Nickell Robey-Coleman. The referee (standing within five yards of the play) failed to throw the flag on the blatant pass interference. Had the referee thrown the flag on Robey-Coleman, the Saints would’ve been able to run the clock down to mere seconds remaining and allowed Will Lutz to attempt what would be the game-winning field goal. However, the call was not made, and the Saints were brought to fourth down. Will Lutz connected on a 31-yard field goal.

The Rams got the ball back with 1:41 remaining in the game. They made great use of their opportunity as they drove down the field and Zuerlein once again hit a field goal, this time from 48 yards out, and sent the game into overtime.

The Saints won the coin toss and elected to receive the ball. Saints’ running back Alvin Kamara advanced the kickoff, setting the team up for the first down on their 26-yard line. Things started shaky for the Saints as Brees failed to connect with Thomas over the middle as the ball was tipped at the line of scrimmage. Brees’ next pass fell incomplete as well, but the referees called pass interference on linebacker Mark Barron. With the Saints positioned on their 40-yard line, they chose to run the football with Mark Ingram II. The play call didn’t work well for the Saints as the Rams’ defensive line broke through and stopped Ingram for a loss of six yards on the play. On the next play, the entire Who Dat Nation dropped to their knees as Rams’ safety John Johnson pushed off of wide receiver Michael Thomas as he intercepted Brees’ pass on the Rams’ 46-yard line.

The Rams then drove a total of 15 yards as that’s all they needed to enter field goal range for Zuerlein. They lined up for the kick, but Sean Payton called a timeout, trying to ice the kicker. Payton’s efforts were unsuccessful as Zuerlein was able to kick a 57-yard field goal straight through the uprights, effectively ending the game and earning a trip to the Super Bowl for the Rams.

Drew Brees completed 65% of his passes for 249 yards, two touchdowns, and one interception (which should not have counted as it was yet another missed call from the referees).

Alvin Kamara was the real offensive star for the team in their losing effort. Although he didn’t have a fantastic game on the ground, Kamara creates mismatches through the air as he hauled in 11 receptions for 96 yards.

On defense, linebacker Demario Davis continued to play great. He recorded 14 total tackles, including one tackle for loss, one pass deflection, and one fantastic interception on the Rams’ first offensive possession.

As heartbreaking as the loss indeed was, the Saints truly fought hard as they tried to pull off a victory. As the Saints have found multiple times this season, it’s tough to beat both the opposing team and the referees.

Although the season is now over, the Who Dat Nation can still watch some of their favorite players like Drew Brees and Michael Thomas play in the Pro Bowl on January 27.