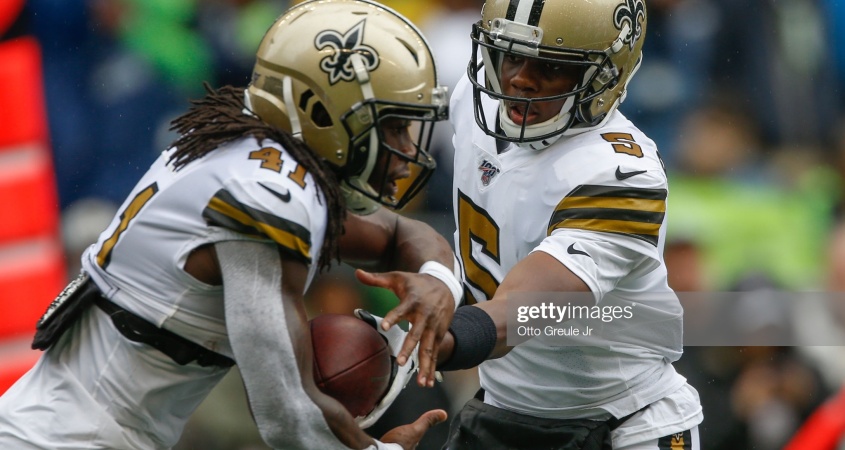 In the days following Drew Brees’ right thumb injury, many Saints’ fans were left feeling nervous about how their favorite team would play without their superstar quarterback. Fans seemed divided as many wanted to see the electric Taysom Hill take control of the offense while others wanted to see if Teddy Bridgewater could return to his former starting form. Throughout the week, head coach Sean Payton refused to name a starter for Sunday’s matchup against the Seattle Seahawks. Payton insisted that the Saints would take a 2 QB approach to the game. However, once the game began it was Bridgewater who earned the start and maintained it throughout the game.

Bridgewater played well enough to keep his team on top. There were a few errant throws, but for the most part, he played a mistake-free game. With a superstar like Alvin Kamara on offense, that’s all the Saints needed from Bridgewater.

Kamara put on a show as it seemed like nobody on the Seahawks’ defense was able to bring him down. The third-year running back had one of his best performances in a Saints’ uniform as he ran 16 times for 69 yards and a rushing touchdown, but he also dominated through the air, hauling in nine receptions for 92 yards and a touchdown. On Kamara’s receiving touchdown, he showed off his toughness and balance as he broke three tackles and tip-toed along the sideline for the score. Kamara’s strong performance helped to alleviate the pressure from Bridgewater and the rest of the offense.

Both the defense and special teams unit also did their part to help the Saints beat the Seahawks in their home stadium. The Saints’ first score of the day came from a 53-yard punt return touchdown by Deonte Harris. The player who Sean Payton raved about all offseason lived up to the hype by providing the Saints with a massive spark of electricity to begin the game. The Saints’ second score of the day came from a 33-yard fumble return by Vonn Bell. The referees must have learned from their previous mistakes as they allowed the play to carry on without blowing the whistle to signal the play dead. After the play was over, it was reviewed and later confirmed to be a forced fumble and recovery for a touchdown for the Saints.

The Saints were able to travel to Seattle and handle business by beating the Seahawks 33-27. Bridgewater didn’t play spectacularly well, but he did exactly what the Saints needed him to do by playing well enough to get the win. The Saints were able to play highly conservative during this game, but that likely won’t work next week against a Dallas Cowboys team that looks very explosive throughout the first three weeks. Payton will likely develop a more aggressive gameplan to handle the Cowboys next week on Sunday Night Football back home in the dome.