Some people say expect the unexpected. Well, the New Orleans Pelicans did the exact opposite of what these people say, making the most predictable move of the decade by drafting Duke superstar Zion Williamson with the 1st overall pick in the 2019 NBA Draft.

Williamson, a 6-foot-7 Power Forward, is looked at to be the next face of the NBA. He averaged 22.6 points, 9 rebounds and 2 assists per game at Duke in just his freshman year. After putting up these monstrous stats, he decided to enter his name into the NBA draft pool, a move that was a surprise to nobody. Zion is undoubtedly the best player in this draft, and New Orleans is going to relish in the fact they landed him. He can do it all. He has fantastic bounce, soaring over opponents for highlight-reel dunks. He’s got a second-to-none post game. His combination of speed, size, and power make him almost unguardable. He also has definitive skills on the defensive side of the ball, shown off by his average of 1.8 blocks and 2 steals per game in college.

If there is anything negative anyone could say about Zion, it’s his lack of a jump shot. While he has improved his mid-range jumpshot, he still lacks skills as a 3-point shooter. He only made 33% of his three-pointers last season, granted he only shot about 2 per game. His shooting stroke will need to be improved, even slightly, to fully maximize his game at the next level.

Even without counting on him as a three-point shooter, New Orleans would have been ridiculous to pass up on Zion. He’s a force to be reckoned with on both ends of the floor. With the departure of Anthony Davis due to trade, Zion becomes the perfect young centerpiece of a rebuilding Pelicans franchise. Zion is ready to take the league by storm, and New Orleans is ready to see a return to winning basketball.

It’s been a long time coming for the New Orleans Pelicans. After leaks of Anthony Davis trade demands began just before the trade deadline in February, one question has been at the forefront of every Pelicans fans’ mind, “Where is New Orleans going to send AD?” Well, that question has just been answered.

On June 15th at 5:27 PM, infamous NBA Insider and reporter Adrian Wojnarowski reported that the New Orleans Pelicans front office, led by newly acquired Executive Vice President of Basketball Operations David Griffin, agreed to a trade with the Los Angeles Lakers. In return for Davis, the Pelicans will receive Lonzo Ball, Brandon Ingram, Josh Hart, and three first-round picks, one of which being the 4th overall pick in the upcoming 2019 NBA Draft.

The Pelicans pulled a great haul for a generational talent in Davis. All three players they received are 24 years are younger, giving the Pels great young talent to build around. Ball, while not a fantastic scorer, shows endless potential in his playmaking and defensive skills. Ingram, when healthy, is a skilled scoring wing, putting up 18 points per game last season. Hart also gives a needed fire off the New Orleans bench. Gaining the 4th pick means they will have now have two top-4 picks, as they won the lottery back in May to be awarded the 1st overall pick. The 1st pick will presumably be Duke superstar Zion Williamson, a 6 foot 7 wrecking ball preparing to wreck havoc upon the NBA. The 4th pick is not so predictable though, as there is multiple routes New Orleans could choose to explore.

Whatever the case may be for the future, it sure looks bright in the present. The Pelicans took a negative situation due to non-stop media coverage on the Davis drama and turned into one of the most electrifying trades the NBA has ever seen. There is no doubt this trade will impact New Orleans and Los Angeles in a huge matter. While the future is not certain, one thing is for sure. Anthony Davis is no longer a Pelican.

In what was expected to be an easy win for the Houston Rockets, the New Orleans Pelicans defeated the Rockets 121-116, even without 4 of their 5 starters. Anthony Davis, Julius Randle, E’Twuan Moore, and Elfrid Payton were all out due to injuries. Key bench player Nikola Mirotic was also ruled out.

The Pelicans were definitely not expected to win this contest. Frank Jackson made his first career start, and the Rockets had both Chris Paul and James Harden healthy. Even without 5 of their top-7 players, the Pelicans were able to hold off the potent offensive attack of Harden and the Rockets. Although Harden scored 37 points, a lot of those points came in the fourth quarter when the Pelicans had strong control of the game.

Jrue Holiday showed why he should be an All-Star this season, as he became the first guard in the history of the NBA to record at least 17 points, 6 rebounds, 8 assists, and 6 blocks. Jahlil Okafor led the Pelicans in scoring with 27 points, while also recording 12 rebounds. Okafor has been fantastic the last 5 games, recording 4 double-doubles and scoring over 15 points in each of the contests. He’s also averaging 2.6 blocks per game over this 5 game span. Many other players stepped up as well, as 6 total Pelicans scored in the double-digits.

The Pelicans played some great defense against one of the better teams in the league. It was a great win tonight, mainly to prove to the league that New Orleans is more than Anthony Davis, something fans truly needed after Davis’ trade request earlier this week. While it is still unforeseen what the future holds for New Orleans, if the Pelicans play like a team and work together like they did against the Rockets, they may be better than everyone expects. 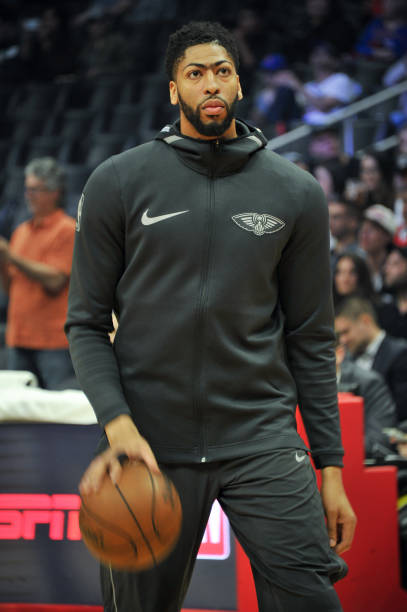 It is sad I even have to write this article. The Brow has requested a trade from the Pelicans, leaving Pelicans fans hopeless for the future. However, it’s possible to look forward. AD already stated he wants to be on a team that can offer him a chance to win a championship, meaning the Pelicans may have slim pickings if they want to please Davis. Although no team can really give a trade package that would immediately constitute Davis, some teams can offer some young players with great potential. Thanks to NBA Trade Machine, fans have a way to work out potential trades based on NBA rules and teams’ salary caps. Here are some trades that Dell Demps and the Pelicans front office could consider:

The Los Angeles Lakers, thanks to LeBron James and their plentiful young talent, are the favorites to land AD. They have numerous young pieces that they could give the Pelicans and draft picks to go along with those players. The Pelicans would surely demand at least 3 out of the 5 of Lonzo Ball, Josh Hart, Brandon Ingram, Kyle Kuzma, and Ivica Zubac. The Pelicans would also probably want some draft picks to secure some future talent. The only problem is that all these young players have small contracts, meaning the Lakers would have to trade an older player making more money. Although the Lakers would like to keep Kuzma on the roster considering his great talent, it would be hard to resist Anthony Davis if it means parting with him. Here are two trades that could give the Pelicans a nice, young core and stay within the salary restrictions.

The team that could arguably give the Pelicans the best return, the Boston Celtics are another favorite to land Davis. Although due to the “rose rule” restricting the Celtics from trading for Davis this season, they could wait until July 1st to get the trade done. The Celtics have great pieces in place to win a championship now, but they would have to lose some of these pieces in order to acquire AD. Jaylen Brown and Jayson Tatum are two of the best young players in the league, but Boston would have to part with one if not both of these talents to get Davis. New Orleans could land both young pieces and another solid player in Gordon Hayward in exchange for their superstar.

The 76ers and their Big 3 of Joel Embiid, Ben Simmons, and Jimmy Butler have shown they are in win-now mode. They were willing to part with Robert Covington, a longtime 76er, and Dario Saric, a young and promising big man, to acquire Butler. Philly believes they are indeed in contention for a championship, and Anthony Davis may be the missing piece. The only problem is, Philly would have to trade one of the Big 3 to get Davis. They do not have any assets besides those players, and they wouldn’t have enough cap space for all 4. Joel Embiid is untouchable, and Jimmy Butler is brand new to town. The move that would make the most sense if they genuinely want Davis would be to send Ben Simmons back to Louisiana, where he attended college. Although it is not a favorite target, if Philly truly trusts “the Process”, an Embiid-Davis pairing would be one of the best pairings ever.

The Toronto Raptors have been a solid team for multiple years now. They haven’t missed the playoffs since 2013. Yet somehow, they always seem to be missing something. This past offseason they traded for Kawhi Leonard, hoping he could push them over the hump. So far they have been playing fantastic, but securing Anthony Davis might make them too good to stop. While they lack big-name assets, they still have players to offer that New Orleans could consider.

Milwaukee is the best team in the East right now in large part to their star Giannis Antetokounmpo. They are a top-2 team on both sides of the ball in the entire league. They also are great at 3-point shooting, rebounding, and are top-5 in assists. Basically, the Milwaukee Bucks are nearly unstoppable right now. Pairing Anthony Davis and Giannis, who actually have similar stats, build, and age, might put them over the top and bring a championship to Milwaukee. While they would have to trade key pieces to their offense, it would be hard to stop the slashing of Giannis along with the paint-dominance of AD. 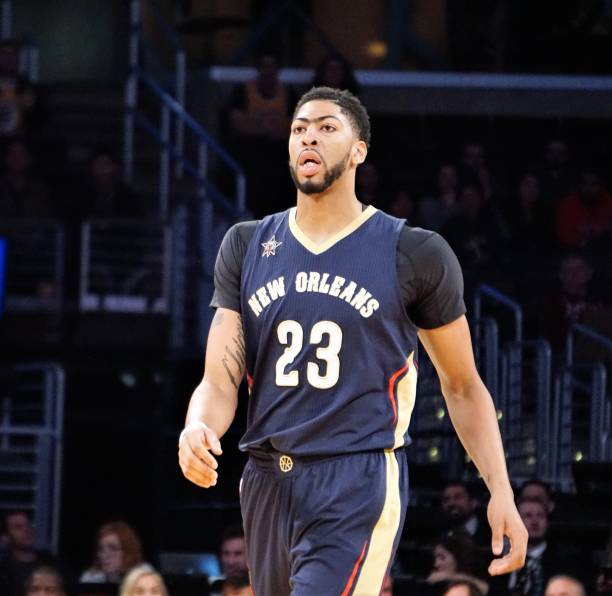 The day a Pelicans fan wished would never come is here. Anthony Davis, one of the greatest players of the current generation, has requested a trade from the New Orleans Pelicans.

In the early morning of January 28th, Twitter went nuts as Davis’ agent Rich Paul reported Davis “will not be signing a contract extension if or when presented and is requesting a trade.” Although many saw it coming, it hurts just the same. Davis is a phenomenal player, averaging 29.3 points per game, 13.3 rebounds, and a career-high 4.4 assists this season. Davis is a true all-around superstar, being a top-5 player on both sides of the ball for many years. Unfortunately for New Orleans, Davis wants to be in a position where he can win more games and compete for a championship.

Its no surprise Davis wants out. A superstar wants to show off his talent, and that’s hard for him to do when he’s always on a team with a losing record. The next step is to see when and where Anthony Davis gets traded to. Although most expect the trade to happen in the offseason, there is still over two weeks until the NBA Trade Deadline. A trade could happen this season, leaving fans wondering who the Pels might get in return.